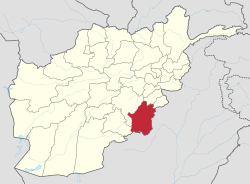 Provincial officials in Paktika did not say anything in this regard so far.

No one claimed responsibility for the attack till the filling of this report.