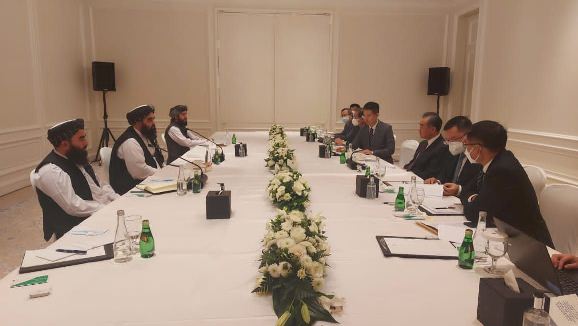 Various key issues, including diplomatic ties, bilateral trade, humanitarian assistance of China with Afghanistan, opportunities for Afghan students in higher studies in China and opportunities and challenges in relations between the two countries were discussed in the meeting.

Taliban spokesman Zabihullah Mujahid said that both the sides agreed to form three committees. One of them would evaluate political issues and diplomatic efforts. The second committee would work for cooperation and understanding between Afghanistan and China. Similarly, the third committee would examine economic issues. It would work on execution of Chinese projects in Afghanistan.

The Afghan delegation said that the new Islamic government assured that the soil of Afghanistan would not be used against any other country, including China.

Muttaqi said that Afghanistan had a balanced foreign policy based on cooperation and mutual understanding.

“China has important place in our foreign policy. It is an important country in the region. All countries of the region, including China would take the benefit of stability in Afghanistan,” he said.

The acting foreign minister of Afghanistan demanded of the Chinese officials to help address the issues of Afghan traders by facilitating exports of various items, including marble, precious plants and dry fruits from Kabul to China.

The Afghan side urged the Chinese officials to find ways for direct trade between Afghanistan and China.

On the occasion, the Chinese foreign minister said that Afghanistan and China had historic relations. China would work on the basis of joint interests between the two countries in the future. The government of China would not make interference in the internal affairs of Afghanistan, he added.

The Chinese officials stressed that they would support Afghanistan to set its roadmap for development.

Later, both the sides agreed to hold joint meetings for expansion of cooperation between the two countries in the future.

It is pertinent to mention here that deputy prime minister Mullah Baradar Akhund had met the Chinese delegation yesterday.