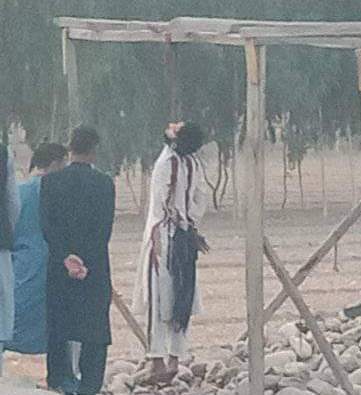 Taliban order officials not to hang bodies of executed offenders

October 15, 2021
KABUL (AIP): The Islamic Emirate’s Minters Council has directed officials to avoiding hanging bodies of executed offenders.
Deputy Information and Culture Minister Zabihullah Mujahid tweeted that IEA ministers council has decided that execution and handing hanging body of an offender must be avoided when there is no need of advertisement or the courts have not recommended the advertisement.
When an offender is given sentence, his crimes should be disclosed so that the people should be aware of the crime he had committed.
The Taliban recently executed several alleged robbers and kidnappers in different areas of the country and hanged their bodies in the streets of the cities so that people could learn a lesson from them.
Similarly, some unclaimed bodies were found in eastern areas of the country. People claimed that the bodies were of Daesh members who were seized by Taliban and later killed with presenting them to the court of law.
In previous Taliban rule, people were awarded different punishment included death penalty, lashing and amputation in public. Ends
Time: 05:20 GMT