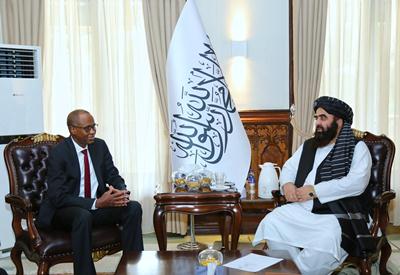 October 6, 2021
KABUL (AIP): Acting Foreign Minister Amir Khan Muttaqi met with Assistant Secretary-General and Deputy Executive Director of the United Nations Children's Fund (UNICEF) Omar Abdi.
During the meeting, Omar Abadi said that UNICEF would provide humanitarian assistance to Afghan children in health, education, vaccination and other fields, said Abdul Qahar Balkhi, spokesman of foreign ministry.
The foreign minister thanked UNICEF for its efforts of providing humanitarian assistance to Afghanistan and urged them to convey the voice of Afghans to the world.
The UNICIF and WFP officials visited western Herat province and sounded alarm on nutrition crisis for children and women in Afghanistan.
According to UNICEF, 14 million people in Afghanistan are facing acute food insecurity, and an estimated 3.2 million children under the age of five are expected to suffer from acute malnutrition by the end of the year. Ends
Time: 13:20 GMT